The woman on stage was tentatively speaking about her experiences as a wheelchair user. Her voice grew stronger as she realized her audience of architects and designers was overwhelmingly sympathetic to her difficulties, and genuinely wanted to understand how to do better.  She came to a slide in her presentation that showed an exam room in a doctor’s office. It had the “required” clearances but, only just barely.  She confidently announced, “When I enter a room like this, I know that they really don’t want my business.”  She went on to explain that while the minimum clearances were provided, there was so much stuff, equipment, dispensers, and other items mounted on the walls that maneuvering her chair in those minimum clearances guaranteed that she would bump into something, or knock it off onto the floor.  The basic movement was incredibly difficult for a mobility device user in this space, and no one had considered how she would actually use the space, beyond the requirements listed in the code.  She was right, the room announced very clearly that she wasn’t welcome there. It wasn’t intentional of course. Part of our job as designers and architects is to think about the end-user of the space we are creating, and how our design impacts their lives. Our motto at Lionakis is “Designing a Better Future”, and for many of us, that means designing beyond building code minimums, and understanding how the space will be used by the people it’s intended to serve.

Some examples of designing beyond code minimums are provided below: 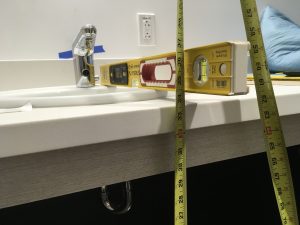 Pictured on the left is a grab bar illustrating how there’s no tolerance if the designer uses code minimum size grab bars.  The lactation photo on the right illustrates what can happen when a detail just shows the maximum dimension (34”). The entire counter had to be lowered.